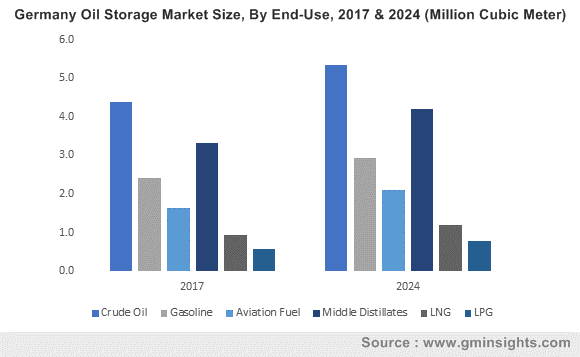 Over the years, oil has established itself as one of the foundations of the modern economy. Nearly every product used in the world today is exposed to oil at some point in the production process, while the transportation sector is heavily dependent on various oil derivatives for powering vehicles.

As demand for energy and fuel continues to expand rapidly on both national and international scales, storage of oil has become more important than ever for countries to manage their supply of petroleum and oil-based products. According to Global Market Insights Inc., the oil storage market is set to cross USD 1.3 billion by 2024.

At a time when crude oil storage is becoming a crucial concern for producers, business entities like Moda Midstream, LLC, are making targeted efforts to boost the expansion of oil storage capacity. In April 2022, the firm placed its final 495,000-barrel tank into service from its 10-million-barrel crude oil storage expansions at the Ingleside, Texas-based Moda Ingleside Energy Center (MIEC) and Taft-based Moda Taft Terminal. As a result of this expansion, the total oil storage capacity at both locations rose to almost 12 million barrels, signifying tremendous growth not just for the oil storage industry, but for the crude oil domain in general.

Energy demand has witnessed a prolific rise on a global scale over the years, with the Asia Pacific emerging as one of the strongest contenders in the production of fossil fuels to accommodate this evolution. According to reports from GlobalData, over 54 oil and gas projects are set to be established across six countries in Southeast Asia between 2019 and 2025. Cumulatively, this would result in nearly 223,000 barrels per day and 8.1 billion cubic feet per day of global crude oil and gas production, respectively, by 2025.

Developments like these are expected to be especially beneficial for the Asia Pacific oil storage market, which could record a growth rate of over 4.7% through 2024, as per GMI projections. In India, for instance, which is the third-largest global consumer of oil and energy after China and the U.S., there has been a massive rise in demand for robust and secure storage facilities for crude oil. This trend has caught the eye of many key players in the regional oil storage industry.

For instance, in March 2022, APSEZ (Adani Ports and Special Economic Zone Ltd) collaborated with IOCL (Indian Oil Corp Ltd) for the improvement of the latter’s crude oil volumes in Mundra. As part of the deal, IOCL was tasked with the expansion of its Crude Oil Tank Farm at APSEZ’s port in Mundra, allowing for the handling and blending of an extra 10 mmtpa crude oil in the region. This move was also aimed at backing the expansion of IOCL’s Haryana-based Panipat Refinery, to increase its oil storage capacity by 66% to 25 mmtpa, in an effort to accommodate the burgeoning energy demand in India.

Modern aviation is becoming increasingly dependent on reliable, sustainable, and safer sources of fuel over conventional existing fuels in recent years. In the U.S. several airlines pledged to increase their use of SAF (sustainable aviation fuel) to 3 billion gallons each year by 2030. This move came following a White House announcement in September 2021 outlining policies, funding, production, and financial incentives for aviation biofuels, as part of its broader goal to decrease the aviation sector’s emissions by 20% by the end of the decade.

Aviation fuels have specific storage needs since they are often required to be stored for longer periods, especially at smaller airports with limited storage capacity. Aviation fuel storage is carefully regulated and is expected to meet various standards in order to ensure the purity of the fuel and in turn improve the safety of the aircraft itself. Insufficient storage capacity for aviation fuels has become a major pain point for many entities and can set off a domino effect involving the non-availability of jet fuel, flight interruptions, diversions, and more.

However, these issues are being addressed by many aviation industry participants like the Louis Lambert International Airport (STL). The establishment partnered with airline collaborators, local officials, and project team members from Burns & McDonnell in September 2021, for the inauguration of a new 3-million-gallon storage facility for jet fuel at the airport. Designed and developed by Burns & McDonnell, the USD 50 million facility was among the few greenfield storage facilities to be built in the U.S. over the past 3 decades. The installation of three new above-ground jet fuel tanks with capacities of 1 million gallons each, as well as provisions for a fourth tank helped the airport nearly double its former capacity.

Since the onset of the COVID-19 pandemic, oil storage capacity has become a major pain point for the oil and gas industry. The emergence of the public health crisis led to global shutdowns of businesses as well as various restrictive measures to curb viral transmission, which created enormous demand shocks in the energy market. These shocks manifested mainly in the form of immense pressure on offshore and onshore oil storage spaces.

The U.S. bore the brunt of this impact, with the nation’s main oil storage and delivery hub at Cushing filing up to 77% of its capacity in April 2022. The construction and management of sophisticated oil storage facilities have thus become a key area of focus for the oil & gas domain to address these demand shocks. In the years to come, oil storage industry may witness a major transformation as O&G market contenders work to ensure a seamless transition towards a sustainable and less carbon-intensive energy outlook.