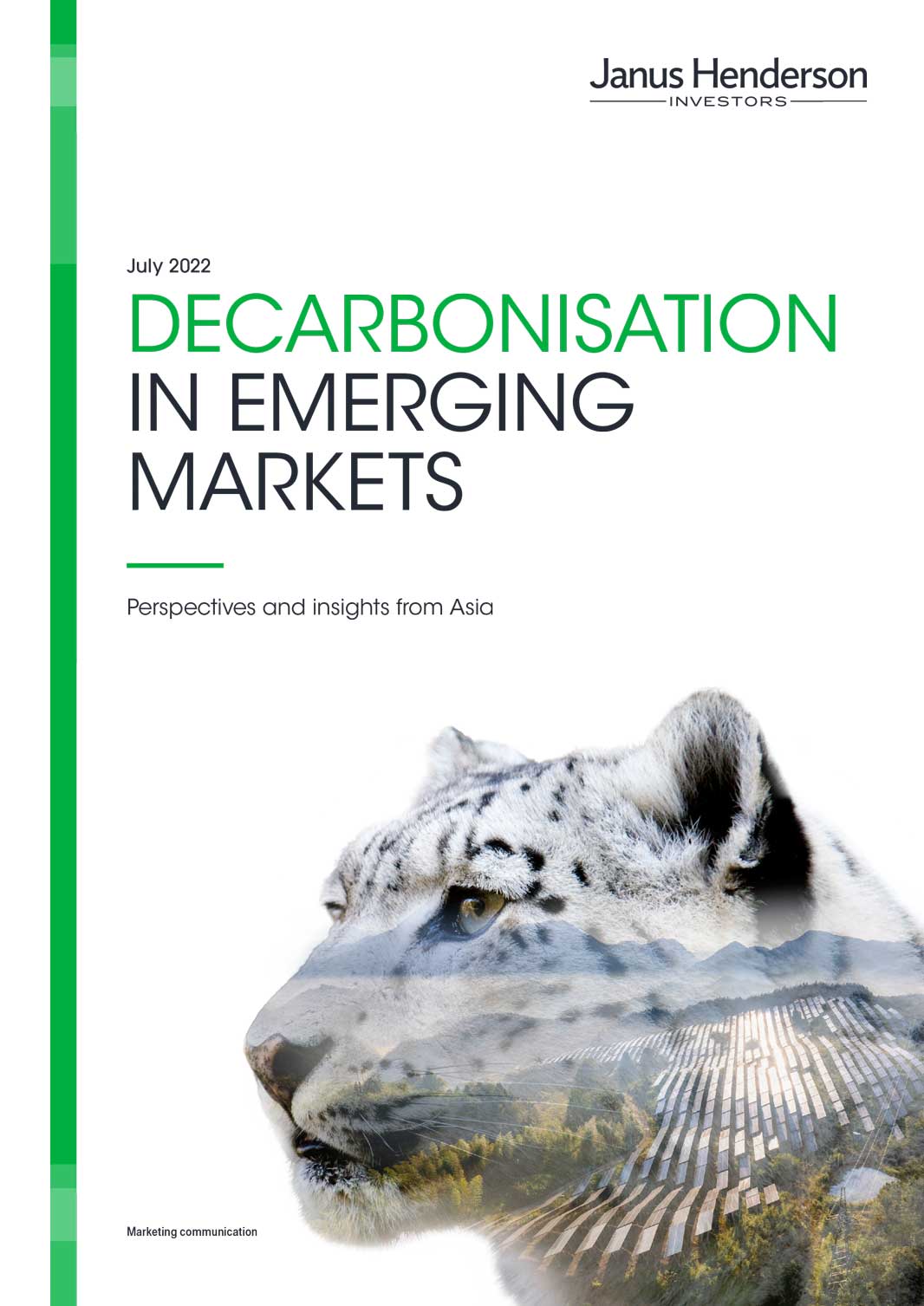 The issuance of climate related financial instruments in Asia is dominated by China, India and the Republic of Korea, whilst most countries do not leverage climate bond issuance at all, according to new research launched by Janus Henderson Investors. The Decarbonisation in Emerging Markets – Perspectives and Insights from Asia report measures the decarbonisation efforts facing emerging markets in Asia against three metrics: renewable energy as a percentage of total energy mix, climate bond issuance as a percentage of total bond issuance, and net zero target dates. This new report builds on the previous report released in February 2022, which revealed that limited policy ambitions and lack of private sector financing curtailed faster progress on decarbonisation in Latin America.

Decarbonisation of Asia critical to limiting a global temperature increase

With China and India being two of the largest carbon emitters in the world, the decarbonisation of Asia is crucial to limiting a global temperature increase to less than 2°C. Yet in 2020, the regional decarbonisation rate sat at 0.9%, well below the global average of 2.5%[1]. This slow progress is due to a number of barriers, including: an energy reliance on fossil fuels, restricted access to green financing solutions, varying degrees of state market control, and poor frameworks and practices that influence emission targets and collect emission data. While nearly three quarters of emerging markets in Asia have set or declared net zero targets, timeframes range from 2030 (the Maldives) to 2070 (India).

However, there has been an uptick in government engagement with renewable energy generation across the region, demonstrating that countries of all sizes understand the role they need to play. At face value, less populated countries consume more renewable energy, but when contextualised by population, China and India’s relative renewable consumption significantly increases. Renewable energy consumption regionally is driven by hydropower, largely due to historical investment, but more recently wind and solar power generation have started to take centre stage.

In 2021, Asia-Pacific was the fastest-growing region for green bond sales globally, driven by a small number of countries. Overall, the region sold US$124.53 billion of green debt in 2021, a 128% increase[2].

Matt Doody, Research Analyst in Emerging Market Equities at Janus Henderson, said: “As the “factory of the world”, Asia uses a significantly higher amount of energy in its economy than other regions – often fueled by coal or diesel. Lowering greenhouse gas emissions and transitioning towards clean energy in these markets requires large investments in productive capacities that can change the energy mix”

As we noted in our last report, the main challenge facing emerging markets is the ability to create regional frameworks or green financing tools that are immune to roadblocks by country specific governments. It is our view that more open and realistic dialogue is needed to create solutions that are flexible enough to react to the reality of local issues, but stringent enough to hold the region accountable for driving long-term change.”

As the economic powerhouse and largest carbon emitter in Asia, China is powering the regional drive towards renewable energy supported by government policy that wants to ignite an energy revolution. China already generates a significant portion of the world’s renewable electricity; wind installations peaked at 72.5 GW in China in 2020, a near threefold increase from 2019, and solar power increased by 60%[3]. China’s national policy aims to achieve 80% of its total energy mix from non-fossil fuel sources by 2060, with a combined 1,200 GW of solar and wind capacity by 2030[4].

China has also developed its own standards for allocating and reporting on the use of green bond proceeds; currently issuers can use up to 50% of the proceeds raised from green bonds for general corporate purposes. This is a positive step but contradicts international guidance that state proceeds must be used exclusively to finance green projects. This difference is one of the key reasons for the misalignment between Chinese versus foreign issuers, and significantly reduces the appeal to international investors.

However, there is scope for China to become a leading sovereign issuer. This move would send a strong signal about China’s green finance leadership globally, opening up the country to more foreign investment and likely encourage other emerging markets in the region to follow suit. However, China’s limited capital account liberalisation, as well as dominant state presence in certain industries, may prevent this from happening soon.

Other key players in Asia: India and the Republic of Korea

Despite the vast need for green solutions and investment, India had limited engagement with green financing until last year, when the country issued US$6.8 billion of green bonds, the strongest issuance since its first issue in 2015.[5] This swift increase in bond issuance has partly been spurred by the issuance of sovereign green bonds, which is incorporated within the government’s official borrowing programme. The Reserve Bank of India is also due to publish its framework for sovereign green bonds later this year, accompanied by a range of financial incentives. This could be the start of a new phase of green projects that hopefully accelerates India’s decarbonisation and energy transition.

The Republic of Korea’s energy sector remains reliant on fossil fuels and energy imports but the country’s commitment to achieving net zero emissions by 2050 is fuelling the sale of green debt. Similar to China’s Green Bonds Endorsed Project Catalogue, Korea has developed its own Green Bond Framework and K-taxonomy to eliminate green washing and has taken significant steps to align these with the EU taxonomy. The development of clear-cut issuance guidelines complements the government’s request for proposals for a possible sale of offshore green bonds, with the intent of increasing foreign investment.

Matt Doody added: “There is a clear decarbonisation opportunity in Asia as it’s home to countries with some of the largest carbon emission challenges. Through the combination of supportive government policy, technological innovation and emerging financing solutions the region is likely to sit at the forefront of the next industrial (green) revolution.”

Emerging markets in Asia will need to continue to balance economic growth against renewable energy affordability and availability. There is a clear opportunity for bond investors to play a key role in helping companies upgrade their capital towards complying with long-term emissions targets and international engagements. With hydrogen predicted to be one of the fastest growing alternative energy sources in the next decade, investing in hydrogen solutions as a low carbon alternative could accelerate the clean energy transition across the region.  Additionally, more robust grid networks will need to be constructed in order to efficiently distribute the surge in power generated by alternative energies. As the energy transition continues to gain momentum across the region, governments are likely to implement regulated carbon schemes that put pressure on private companies to address their carbon emissions. As a result, the demand for a more sophisticated carbon credit market is also likely to increase so companies can buy credits to offset their emissions.

Ales Koutny, portfolio manager at Janus Henderson, said: “While Asia was represented in the early days of green bond issuance, such as Indonesia’s 2019 green sukuk, the region has since became a laggard, falling significantly behind other regions such as Europe or North America. As investors’ appetite for green bonds continue to grow and we start to see some new national efforts, such as Singapore’s green bond issuance framework, Asia could leapfrog the rest of the world.”